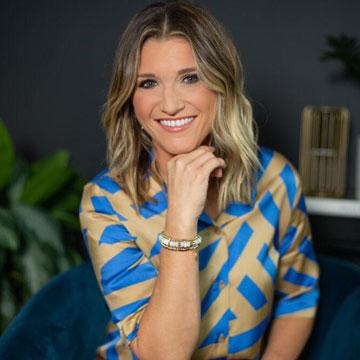 Britney Ruby Miller is CEO of Jeff Ruby Culinary Entertainment where she leads a team of 800 employees at the company’s 7 luxury steakhouses across Ohio, Kentucky and Tennessee.


Growing up in the family business founded by her father in 1981, she learned the intricacies of the business at a young age. She worked nearly every position over her 20 years in operations while earning a degree at University of Cincinnati and attending Midwest Culinary Institute.


In 2011, Britney joined the corporate team. In her tenure, she led the company in growth and expansion, resulting in a 150% increase in revenue. One of her proudest accomplishments is building this team, now 40 strong, 60% of which are women.


Under her leadership, Ruby’s restaurants have earned national acclaim from Travel + Leisure, Food Network, USAToday, Business Insider, and many others.


The impact she and her family are making in the community is perhaps most important to her. As founders of the Jeff Ruby Foundation, they are working to alleviate childhood poverty and improve the foster care system.


Britney sits on the Board of the Cincinnati CVB, Ohio Restaurant Association, and is a member of the Young Presidents Organization. She is also pursuing her MBA at Xavier and recently added best-selling author to her resume, with the launch of her memoir, 5 Star Life.